View source
watch 01:54
Obi-Wan Finale - The Loop
Do you like this video?
Play Sound

Braum is a Seelie Troll of House Gwydion.

Jeans and a plaid shirt.

Serious, at times clueless, but has his heart in the right place.

Now an ex-security guard and doorman at an upscale loft, Braum was once a famed warrior with the Red Branch, and hopes to recapture the wild adventures of his youth.

Mortal Seeming: Stocky and tall, Braum has the look of a man who may have been a wrestler in his youth. He has close-cropped salt-and-pepper hair and beard, and stormy grey-blue eyes. He is often found wearing his well-worn doorman's uniform, and otherwise he prefers jeans and plaid shirts, with sleeves rolled up to his forearms. While the first thing you notice about Braum would be his size, his incredibly serious countenance would be a close second.

True Seeming: Braum's true seeming is even taller, stockier, and tougher than his mortal mien. His cowlicks transform into thick curved horns on his head and face, and his rough skin takes on the appearance of granite or pitted stone. His usual plaid shirts bear more than a passing resemblance to chainmail, or sometimes plate armour, with House Gwydion's eagle emblazoned proudly on them.

Once a mighty warrior with House Gwydion's Red Branch in the Kingdom of Apples, Braum was part of a motley renowned far and wide for their heroic feats, martial prowess, and unwavering dedication to defending all Kithain. After a traumatic event near the turn of the millennium in which he lost his motley, Braum moved to the County of Cross' Shadow. Hoping to start a new life away from the life-changing moment he knows only as "the Dark Time", Braum married and had two children.

Braum immersed himself in the Kithain politics of the city, working to bring House Gwydion into closer contact with the other Seelie Houses. However, living so much of his life as a changeling away from his family strained his relationship so much that he eventually divorced. (More recently, some of his memories from "the Dark Time" were restored, reminding him that his wife's infidelity also played a role in their separation.) He now lives alone, sending as much of his income from his job to his family as he can. He worked as a doorman at a loft which contains The Spark, hoping to recapture the wildness of his youth.

Braum, along with Sophia and Patches, have been put in charge of managing and defending The Spark, even with the return of its freeholder Zistor Flexx. Working with his new motley "Ignite", Braum recovered some of his memories from the creature in his head, Rick, and learned that this "measure" was put in place by members of the Garou, at the request of another member of the Red Branch, Kyoko. He returned the seal coat of his old love, Kay, to her niece, and in that moment began a romantic relationship with Kyoko. Along with her, Claude, and other members of the Red Branch, Braum and his motley set off in search of the mysterious and dangeorus "rocket".

They managed to recover and destroy the Rapture-inducing "rocket", Braum and his motley have also faced vampires of Clan Ventrue, a Dauntain, King Meilge of the Kingdom of Willows, and the Duchess Eloyse. They also participated directly in the appointment of a new High Queen of Concordia after the tragic undoing of High King David.

Unwavering, formidable, fiercely loyal. Loves challenges, and is comfortable in knowing he's proven his worth to Kithain society. Honest and straightforward to the point where he once earned the nickname "Pooka's Bane". 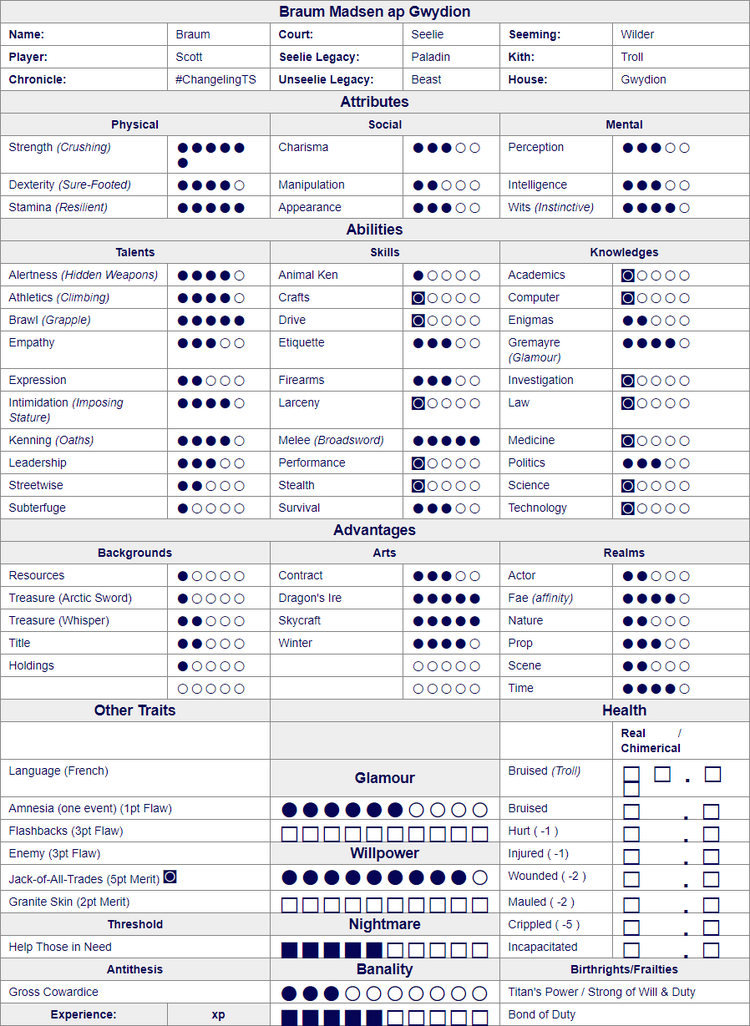