Jorek had always worked for The Guild: in Great Forks, it’s hard to get away from, especially when you have a natural skill for bargaining and getting what you want. With a quick eye, a quick hand, and a quicker tongue, Jorek had been brokering deals for the weapons merchant of The Nine for several years. His Exaltation as an Eclipse Caste came just as he had been double-crossed by a business associate, and with his new power, he journeyed to Nexus in the hopes of using it to further The Guild’s interests… and his own. Cunning, organized, and charming with a devil-may-care attitude, Jorek longed to bring warring groups together under his own banner in Nexus. Now, with his Circle, he is seeking to balance the scales of fate in Creation, having lost so much: friends, allies, an eye, and a daughter he didn’t know he had.

Born and raised in Great Forks, Jorek entered an apprenticeship with a Guild weapons merchant early in his life, using his uncanny observation skills and natural persuasiveness to secure deals. As a teenager, Jorek was constantly on the prowl for opportunities to make money and new allies. He had a short-lived love affair with Tai-La of House Dvorah; unbeknownst to him, she had a child by him that she gave up.

After rising in the Guild's ranks, Jorek was betrayed by a sometimes-business partner and, in that moment, exalted as a Eclipse caste Solar. Fleeing Great Forks for the relative safety of Nexus, he encountered two other newly-exalted Solars, Valeria and Rey. Very reluctant to out himself as a Solar, Jorek mostly worked alongside his allies to secure their position in Nexus. They made new allies in two Dragon-Blooded members of the Wyld Hunt, Ember and Summer Blaze, as well as of a former circlemate, now Abyssal Exalt, Three Fates Shadow. They also encountered a very sensual and manipulative Lunar, Speaks-of-Silence, who mistakenly believed herself to be Jorek's mate… although she later fell in love with Valeria.

They fought many enemies in Nexus: a powerful magistrate; Entropy, the chosen of Discord; Ember's wife, Tepet Exquisite Tide; a huge Tepet army; and a dark circle of four other Abyssal Exalts hunting Three Fates.

In the wake of the murder of the Council of Nine and the near-destruction of Nexus, the Circle left to seek answers about the Sidereals. In Chiaroscuro, they met another Solar Exalt, Quiet Word, and his adoptive daughter Sola, later discovered to be Jorek's by Tai-La. The two were tragically killed by Three Fates Shadow's Deathlord when he came to claim the Abyssal, and Jorek also lost an eye in the battle. The tragedies of that day almost destroyed Jorek, but he was able to reaffirm his strengths in Yu-Shan, where they brought Three Fates Shadow to be re-Exalted as a Solar, All Fates Saved.

Together, the Circle returned to Nexus, where they defeated Rey's mother, Tepet Deep Fury, who had annexed the city state on the heels of the Solars' victories. They also faced their toughest battle yet against the Deathlord himself, The Clouds of a Gentle Father's Fall To Cacophony, defeating him in the Underworld. They then went on to conquer the challenges of the Imperial Manse and take control of Creation back from the Terrestrial Exalted, instituting a new rule in Creation: the dawn of the Third Age.

Jorek travels throughout Creation, bringing the new laws and order of the Third Age to the far-flung territories in the Threshold (and the Wyld). Travelling with Eyes Alight, one of his first orders of business was to commission a beautiful statue of bronze of his daughter, Sola, in her hometown of Great Forks.

Drawing Out the Penitent's Confession

5m, 1 wp (Reflexive) - Final Beat understands the need for knowledge, and that the dead do not usually give up their secrets. Upon killing a target, roll Charisma + Socialize: for every success, you may ask the target one question whose spirit (not wording) will be answered completely. You must have dealt the final blow.

10m, 3wp; 10m, 2wp if at bonfire; 1 permanent wp (supplemental) - Final Beat understands that sometimes mistakes are made - and they need to be rectified. Should Final Beat deliver the killing blow during a round of combat in which this evocation was activated, it erases the action of the target from the last three rounds. Only the wielder of Final Beat (and any witnessing Sidereal Exalted) will remember the rewound actions. 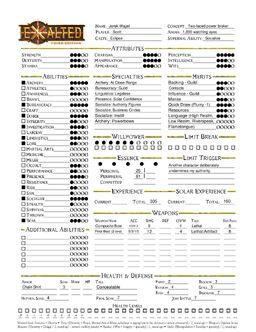 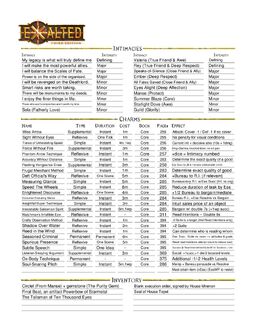 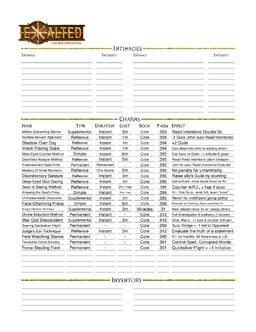