View source
watch 01:54
Obi-Wan Finale - The Loop
Do you like this video?
Play Sound

Patches is an Unseelie Nocker.

White hair with an undercut, glasses, 5'5" and very slender.

Most often found in ripped cargo jeans and a plaid shirt with a patch somewhere.

She works a day job as an architect, but prefers spending her time in The Spark's workshop tinkering with gadgets she's dreamed up.

Mortal Seeming: Sporting short brown hair with an undercut, Patches can often be found wearing ripped jeans or a well-worn plaid shirt. She stands at 5'5" tall and is lean, but surprisingly muscular.

Patches carries a tool belt, tends to wear cargo pants, so she's always got a multi-tool, and her lighter, and a couple of other small things, a short length of string, paper clips, bobby pins, safety pins, you know. She's ready to MacGyver anything.

True Seeming: Goggles on her forehead keep her nigh-untameable silvery-white hair out of her metal-grey eyes. When working on a project she can be found in overalls, but when she has to appear in court she wears only garments of her own design; usually with a pastiche of materials not constrained to traditional fabrics.

Patricia was born in the South of London, but she and her mother immigrated to Canada several years ago. They ended up in Montreal, where Patricia attended McGill University while serving in the naval reserves. Once she left the reserves she began working as an architect.

Learn about her Chrysalis here.

Having recently switched to a new architecture firm, she discovered a freehold in the building, located on the non-existent 13th floor. Braum, the building's doorman, mentioned a blown fuse in passing one day, which Patches happily fixed and since then she has made a habit of helping around the building - though she would never deign to call herself something so lowly as a caretaker. A while later, when Sophia made mention of wanting to do renovations in her apartment, Braum suggested Patches for the job.

Since then they have become friends, or at the very least prefer eachother's company when relaxing in the freehold.

When not working her day job, Patricia prefers to slip into the freehold (conveniently located in the building where her office is) and work on projects… many of which are never completed.

Stewardship of the Spark

Zistor Flexx disappeared and left Patches, Braum, and Sophia in charge of The Spark; his freehold.

It took some time to learn how to work with her fellow freeholders, but difficult situations helped build that trust. Patches was initially hesitant to open the freehold to visitors, but Cog's arrival helped to convince her.

She began sleeping with Duke Granville after The Spark hosted Pennons, but has had a few other one night stands over the years since that entanglement began.

They eventually rescued Zistor, but Patches was kept as Steward of the Spark.

In pursuing Talus, who had been revealed as Dauntain, the trio found themselves at Tara Nar and finally in a moment of need formed a motley called Ignite. They were unable to save High King David, but did manage to stop an army of Nockers trying to take over Tara Nar in his absence. It was their role in these events that led to Patches being asked to build a new wing of the Grand Bes Din.

At the opening of the N.O.V.E.L. wing of the Gran Bes Din, she was confronted with her perceived disdain for nobility. In the face of Xaeron potentially being married off against his will for the sake of a Dougal alliance, she approached High Queen Lenore and was granted a title. 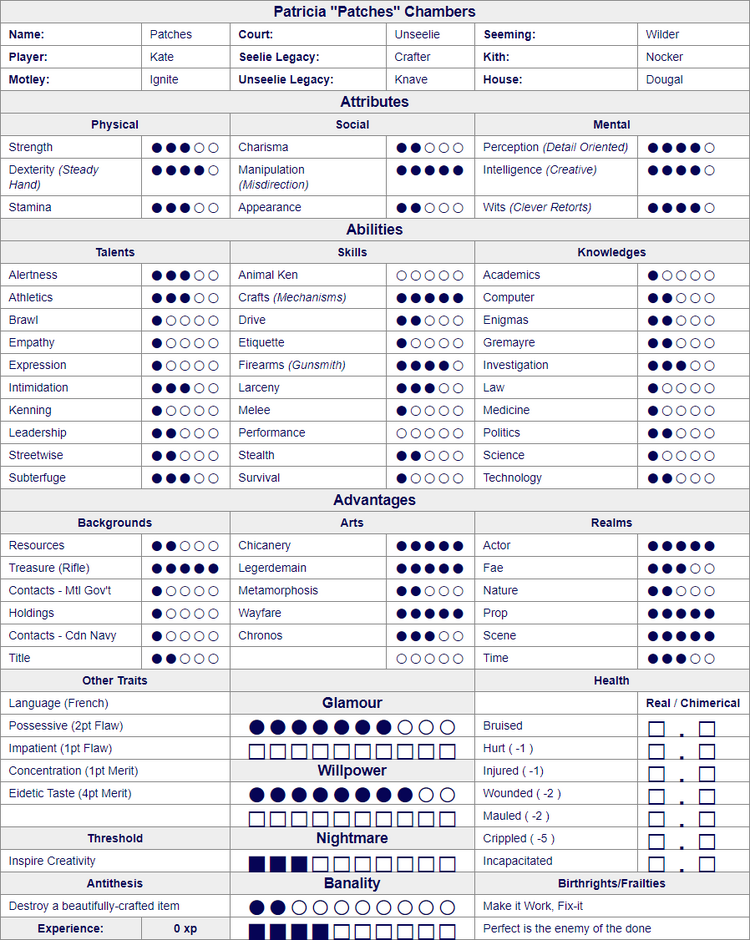