Born and raised in Nexus by her father, she learned the hard way how to defend herself in the city’s unforgiving streets and developed an affinity for it. When her father became ill she took to brawling in the fighting pits to earn money for his care.

Reeling after revelation upon revelation (her mother's betrayal, Tide being her sister), Rey is struggling to prove that she's more than a "disappointment" while coming around to the idea that Tide may also be more than she appears.

10m - Make a decisive attack. If any damage results I may spend 10 motes to:

10m - Make a decisive attack. If successful, for every 10 initiative I have I may reduce the level of 1 intimacy of the target’s by 1 for 1 scene. This does not do damage but does look like an attack. Does not function on someone in limit break. I cannot remove an intimacy that does not exist. This does reset initiative. 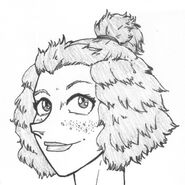 Rey by Lo
Community content is available under CC-BY-SA unless otherwise noted.
Advertisement