Sophia is a Seelie Autumn Sidhe of House Liam.

Wanting to find the beauty in everything.

She considers herself a true bohemian, busking by day and deeply entrenching herself in the arts scene. Firm believer that a perfect world can be achieved, and that it requires perfect harmony between Dreaming and Autumn, as well as perfect harmony within each and every individual.

Mortal Seeming: Be it the mortal realm or the Dreaming, Sophia is incredibly beautiful. Mortals see a woman with long hair, highlighted with pink and purple. Her style is very "flower child": long maxi dresses/skirts & jewelry. Sophia's hygiene is always immaculate and no matter how much she may give off a bohemian, casual air, each and every detail has been carefully planned out. Her eyes are a striking violet, and there's no hiding the fact that there's something a little…unnatural about them.

True Seeming: Even for a Fae — even for a Sidhe — Sophia is striking. The colour of her hair shifts through pastel hues; a gradual transformation, but suddenly you may look over and think "wasn't her blue hair pink just a second ago?" She has pointed ears and her eyes are that same striking violet, with flecks of gold. She's pale and lightly freckled. Slim, average height. Favors long dresses and skirts in metallic, duo chromatic materials.

Sophia comes from a family of artists: her mother a painter, her father and brother novelists. She was drawn to music at a young age, and encouraged by her parents. Her skills as a musician, particularly with the harp, grew and grew. She was home-schooled and didn't bother pursuing anything beyond a high school degree, although she did take some night classes in topics that interested her: namely mythology, classic literature, art and music.

She has never had any financial concerns. Her music, surprisingly, proves more than enough to support her and her lifestyle; with EP sales and concert engagements making the bulk of the money, although her busking is fruitful as well.

Following her chrysalis, she acquired the interest of House Liam and started playing for Fae banquets. It was at one such banquet that she earned her title.

The Harp: A beautiful pedal harp was purchased second hand for Sophia by her parents when she first expressed interest in playing the instrument. After Sophia's chrysalis, the harp was revealed to in fact be a very special chimerical companion. To mortals, it is a harp. To those who can see the Dreaming, it takes the form of a small, brilliantly coloured lizard affectionately named "Mab".

Sophia has been living in her current loft for about a year; the same building as Braum and Patches. She got to know Braum through conversations at his desk near the front entrance, and when she wanted renovation work done on her apartment he suggested she talk to Patches. The three of them are now acquaintances, though Sophia wouldn't mind if this progressed to friendship. She's fascinated by both of them for different reasons: Patches for being so "rough around the edges"; Braum for his barely detectable pain that Sophia is determined to get to the root of.

She goes out every morning to busk (Mab's lizard form making the harp much easier to transport), meet passer-by, and hopefully inspire some dreamers.

Soft-spoken, until she gets going on a topic she's passionate about. Curious, earnest, eager to learn everything about everybody. 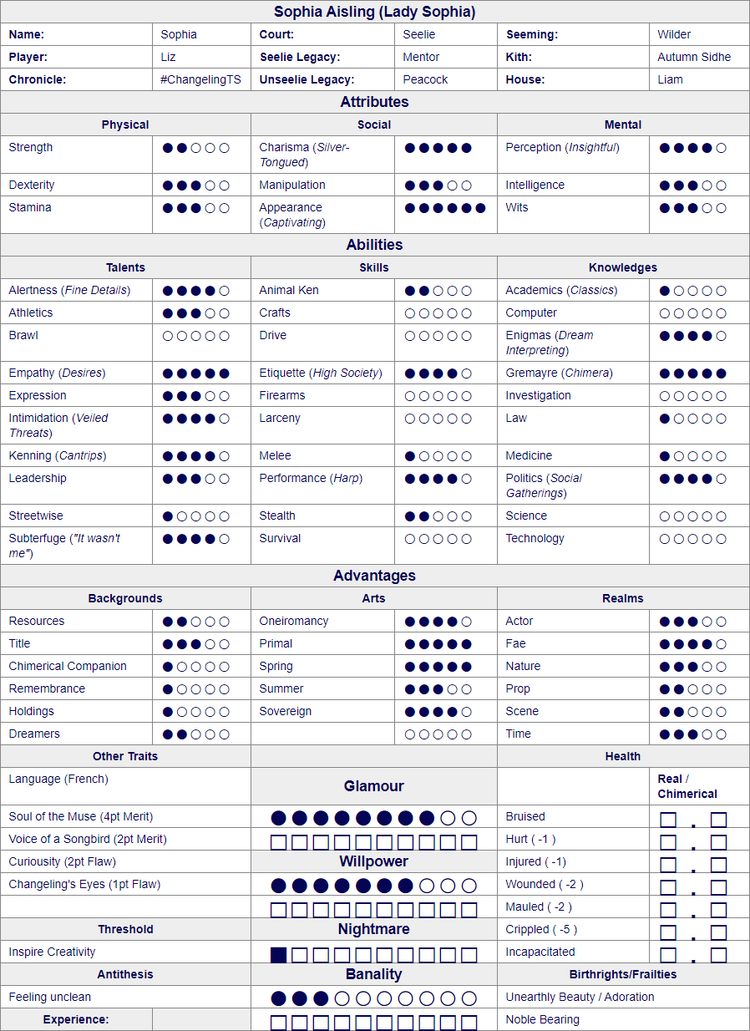